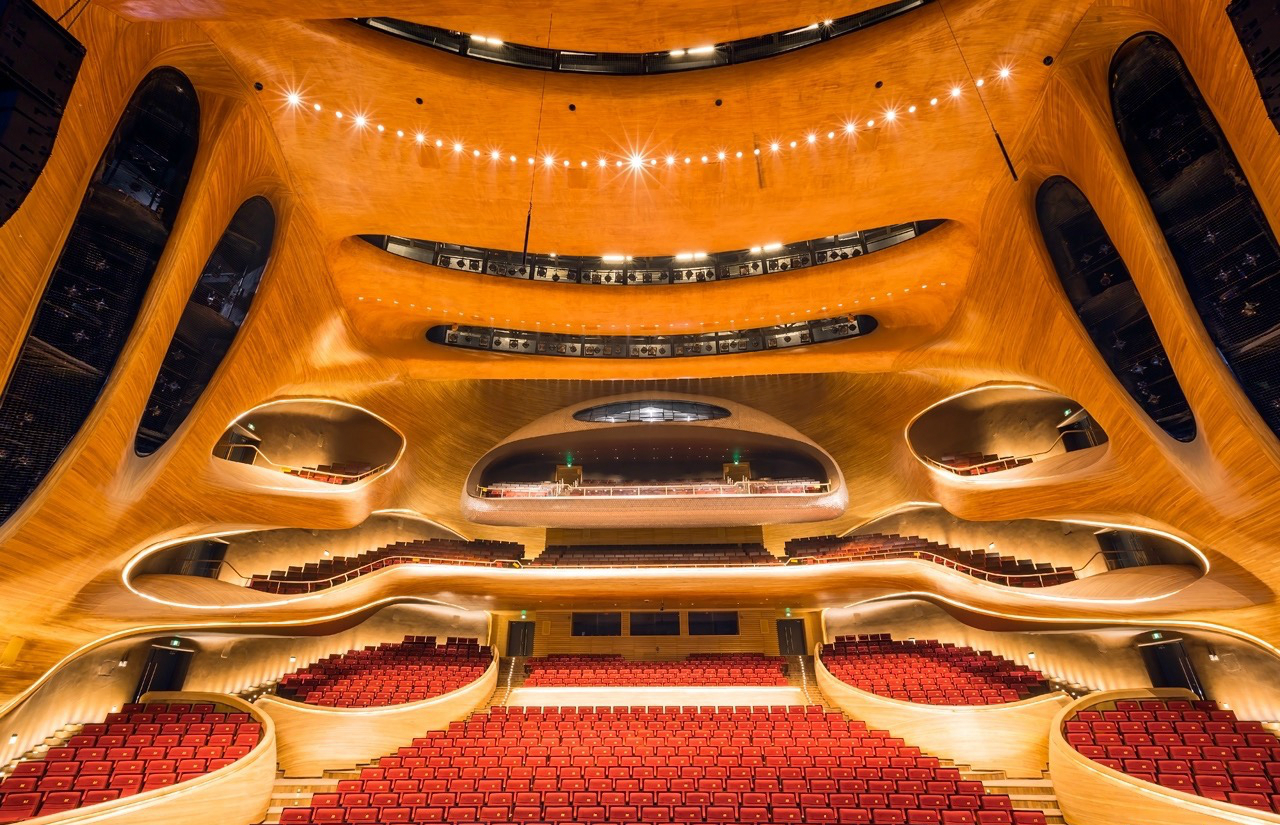 Harbin is a city famous for its over one hundred year old Symphonic Orchestra. From 1961 up until now, 32 seasons of the „Harbin Summer Music Concert“ have been successfully held there, adding to the city’s exceptional reputation across the country.

In 2010 it became the first city in Asia named „Music City“ by the United Nations and remains the only one in China to carry this title. To even further highlight Harbin’s cultural potential the Harbin Municipal Government decided to build Harbin Grand Theatre as a leading, national, state of the art – theatre for the city’s music loving population.

Harbin Grand Theatre is situated on Songhua river’s north bank, at the heart of the Sun Island Scenic Area, and in close proximity to Harbin’s famous Siberian Tiger Park. Conceived by Beijing’s MAD Architects Harbin Grand Theatre breaks with traditional design concepts. Appearing as if sculpted by wind and water, the building seamlessly blends in with nature and the topography of the surrounding wetlands. Resembling a silver ribbon in the sky in summer, the construction melts into its snowy environment during winter. The project cost is an estimated 1.279 billion Yuan Renminbi excluding interests and loans and its construction was entirely covered through self-raised funding by Songbei district. Covering a total of 79.000 square meters with a construction area of 72.000 square meters, the site consists of the Grand Theatre’s opera house (1538 seats), a small stage (414 seats), a box office and 470 parking spaces. The opera house measures 56,48 meters in height and serves as a venue for major opera, ballet and dance productions while simultaneously functioning as a concert hall. The auditorium is built in a horseshoe shape with a classical proscenium stage that employs state of the art stage equipment and making use of top international standard lighting and sound systems. The playhouse with a height of 25,75 meters meets the needs of drama, chamber music but also international and traditional Chinese opera performances and other events that can be hosted in this multifunctional hall. Altogether 28 dressing rooms, three rehearsal halls and 21 elevators guarantee a comfortable working environment.

Harbin Grand Theatre’s design excels due to its innovative ideas: The building’s architecture allows for a natural flow of daylight, making it the world’s first theatre to employ this new energy saving lighting model during non-performance times.

Bringing together beauty and novelty, the venue’s interior design, modeled after an array of islands, as well as the terrace’s dynamic streamline shape flow in unison with the theatre’s exterior aesthetics. The playhouse stage is backed by a completely soundproof window font that makes it possible to use the outdoor landscape as a backdrop while at the same time providing the spectators with a new performance experience. The theatre’s rooftop is the world’s first that may be used as a walkabout for visitors to enjoy the scenic surrounding areas. By organically connecting different levels the whole theatre becomes a unique 360-degree all-weather viewing platform. Surrounded by streams of water Harbin Grand Theatre stands as a pier in the midst of the beautiful wetland landscape. Contributing to sustainability Harbin Grand Theatre proves that there is no need for luxury building materials. Making use of common metals, wood and cement instead, it demonstrates the importance of knowledge, experience and technique over extravagance.

Harbin Grand Theatre’s quality manifests itself in many aspects: In order to equally satisfy the needs of fire safety precautions, acoustics and aesthetics its designers made use of GRC, glass fibre reinforced cement, as a base material with the wood panels being clad on its surface as a more decorative finish. Made from more than 20 million pieces of root wood from Manchurian ash, adding up to a total of 190 kilometres, the panels were carefully pasted together by skilled woodworkers one by one, polished and painted until eventually creating the illusion of a uniform solid-wood structure with its natural texture and colour. The theatre’s steel structure combines a variety of today’s top construction techniques, its main materials alone adding up to a weight of 7.000 tons, the equivalent to one Eiffel Tower. The outstanding engineering quality won it the “Lu Ban China steel structure gold award for engineering excellence”. The theatre’s metal roof expands over an area of more than 50.000 square meters, or the size of roughly seven football fields. Due to the complexity of its hyperbolic shape more than 30.000 metal plates, all unique in size and form, were produced, each formed in its own three dimensional mold and then applied piece by piece.

To achieve the effect of being inside a sparkling crystal despite using natural light exclusively, 56.655 acrylic triangles, each 12 centimeters high were attached to the third floor balcony. Construction cost, safety and quality have been successfully controlled and maintained as planned during five years of production and therefore resulted in a timely finish without incidents or delays. The venue celebrated its opening in March 2016. Harbin Grand Theatre wishes to not only continue Harbin’s rich cultural tradition but to also become the new face of over one hundred years of performance history in the city of music.